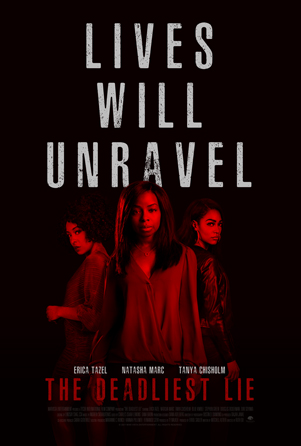 Sam (Erica Tazel) is a single mom struggling to get the recognition she deserves at her law firm. After being looked over again as lead on a case by her boss, she decides to blow off some steam at a new club with her good friend, Kiki. There, Sam meets a handsome man on the dancefloor, and the two take their hot and heavy session to the parking lot. The man forces himself onto Sam, and she fears her worst nightmare is about to come true, but is startled when she rescued by a stunning and mysterious woman she later comes to know as Giselle (Natasha Marc). Intrigued by one another, the two women form a fast friendship, leaving Sam’s best friend Kiki (Tanya Chisholm) feeling left out. Giselle takes Sam under her wing, building her confidence and helping her secure high-profile client Jaden Turk (Blue Kimble), who is in need of a good defense team after a messy divorce. Sam believes she’s finally found her stride all thanks to Giselle. But Giselle continues to push Sam out of her comfort zone which ultimately leads to a drunken night in which Sam makes the biggest mistake of her career: hooking up with her client, Jaden. Ashamed of her behavior, Sam tries to distance herself from Giselle but struggles to do so as Giselle refuses to go away quietly. When photos of her secret tryst with Jaden are projected during a presentation in front of the firm’s partners, Sam is fired. As Sam’s life unravels and those around her are put in harm’s way, she suspects Giselle is to blame. Little does Sam know, the real saboteur is none other than Kiki.