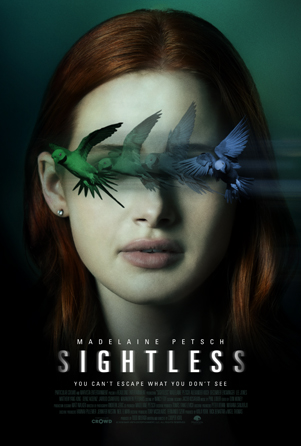 After Ellen (Madelaine Petsch) survives an attack that leaves her blind, Clayton (Alexander Koch), a health aide, is hired to help Ellen adjust to her new reality. Initially reluctant to trust anyone following the attack, Ellen eventually grows to like Clayton—but she’s still determined to figure out who attacked her. As Ellen’s other senses strengthen to compensate for her blindness, she becomes suspicious that everyone around her isn’t who they claim to be—including Clayton. When Ellen realizes Clayton is her attacker and has adopted different personalities to gain her trust and keep her captive, Ellen must outsmart Clayton in order to escape his twisted world and regain control of her life.