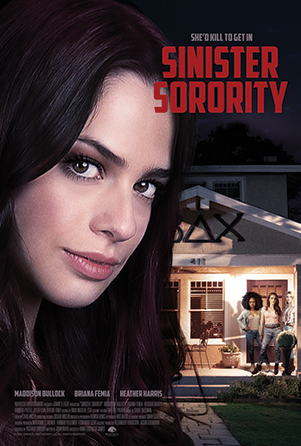 Jana (Maddison Bullock) is excited to welcome the new pledge class to her sorority. She and her best friend, Arielle (Heather Harris), interview several candidates, but Jana immediately connects with Bailee (Briana Femia), a transfer student who is keen to form a sisterhood with the girls in the sorority. Although Arielle is skeptical of Bailee’s inconsistent story and eagerness to be initiated, she ultimately joins the sorority. Once a member of the sorority, Bailee’s attachment to Jana grows into a full-blown obsession as she constantly appears wherever Jana is. While Jana tries to distance herself from Bailee, strange things begin to happen, and she suddenly finds her friendships, relationship with her boyfriend, and academic future in grave danger. When Arielle reveals Bailee’s dark past, Jana realizes Bailee will stop at nothing to keep Jana all to herself and must stop Bailee from harming anyone else before she’s unable to escape Bailee’s grasp forever.