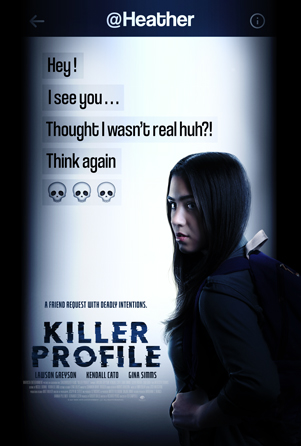 When high school senior Nicole (Lawson Greyson) becomes concerned her popular jock boyfriend, Liam (Derek Rivera), is cheating on her, she creates a fake social media profile under the name “Heather Harris” to test his loyalty. Liam passes her test, rejecting Heather’s advances, which makes Nicole feel silly for ever doubting him. After consulting with her best friends, Nicole deletes the profile out of guilt and washes her hands of the situation—or so she thinks. Weeks later, Nicole is shocked when “Heather Harris” (Kendall Cato) enrolls in her school. Unwilling to believe Heather is real, Nicole begins to suspect Heather is a dangerous liar as bizarre and deadly incidents take place at the school. When the school administration and her own mother, Madelyn (Gina Simms), refuse to believe her claims, Nicole takes it upon herself to find out who Heather really is.