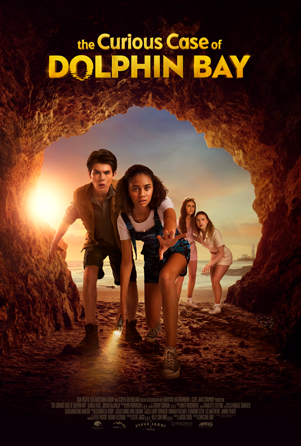 Quinn (Izabela Rose) can’t wait to begin her marine biology summer internship in Australia, especially knowing she’ll be reunited with her best friend Daniela (Ella Proberts). But when Quinn arrives and discovers Daniela has a new best friend named Jennifer (Allegra Teo), she feels left out. However, Quinn soon makes a new friend in Teddy (Jayden McGinlay), an equally eager marine biology enthusiast who also believes in ghosts. As mysterious things begin to happen, Teddy becomes convinced the buried treasure he found in an abandoned shipwreck is being sought after by a ghost named Everly Fallow. Quinn disagrees and thinks whoever is responsible for these incidents is actually targeting the dolphins they’re studying as part of their internship. Unconvinced, Teddy enlists Quinn to help prove his theory. Adventure ensues as Quinn and Teddy find themselves the target of what they believe to be Everly’s ire, and the pair seek help from Daniela and even Jennifer to uncover the mystery of Dolphin Cove. Little do they know the internship groundskeeper, Nate (Charles Cottier), has stolen the treasure for himself! In the end, Quinn and Teddy recover the treasure and make wrongs right as they form new friendships.