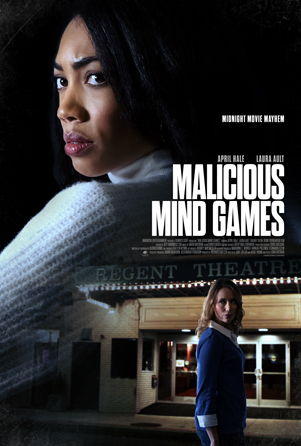 Single mom Isabel (April Hale) starts a new job as an overnight security guard at a theater to make ends meet for her teenage daughter Rosaline (Raiany Silva). While Isabel chose the graveyard shift so she could spend more time with Isabel and work on her master’s program, she has been struggling to stay awake at work. Noticing Isabel occasionally dozing off, a woman named Megan (Laura Ault) who lives across from the theater brings Isabel coffee one morning to help her stay alert. Grateful, Isabel forms a casual friendship with Megan. One night, Isabel witnesses what appears to be a murder in Megan’s apartment building, but when she calls the police, they find the person she thought was murdered is alive and well. Isabel convinces herself she dreamed the incident given her lack of sleep. But when Isabel runs into Megan at Rosaline’s school and Megan doesn’t appear to remember her, Isabel becomes suspicious of her new friend. Is Isabel imagining her friend’s suspicious behavior? Or is there more to Megan than meets the eye?