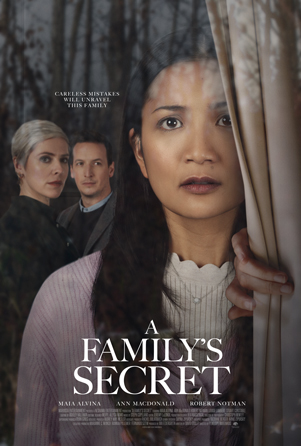 Ana (Maia Alvina) is a nurse struggling to pay for school. When she comes across a lucrative job caring for Joan (Ann Macdonald), a woman struggling with dementia, Ana is intrigued. Joan’s children, Carla (Louise Lambert) and Jason (Robert Notman), interview Ana for the job and, despite Carla’s cold demeanor, Ana wins them over. Following a rough start with Joan, Ana eventually earns her trust and begins dating Jason. When Joan tells Ana she thinks someone is trying to kill her, Ana dismisses Joan’s claim as paranoia, although Ana has noticed the groundskeeper, Terry (Stuart Constable), has an unhealthy interest in Joan. As strange things begin to happen and lead to Joan’s sudden death, all signs point to Ana as making one too many careless mistakes. Determined to find out what’s really happening, Ana learns she’s been set up and tells Jason, but he’s convinced this is all just a delusion his mother has concocted. Could he be right? Or is Joan telling the truth?