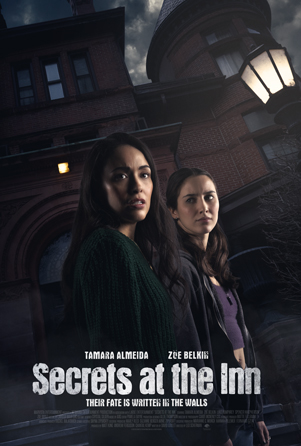 Big city chef Natalie (Tamara Almeida) becomes the legal guardian for her troubled teenage niece, Sabrina (Zoë Belkin), after the tragic and mysterious death of her twin sister, Celia. Coming to live in the remote historic inn that Celia was renovating with her contractor-turned-ex Andy (Luke Humphrey), Natalie is quickly spooked by strange noises in the house, all of which Sabrina—with the encouragement of her boyfriend, Elijah (Spencer Macpherson)—blame on the resident “spirit” of the inn. Natalie doesn't believe their theory, but as her attempts to sell the inn are consistently thwarted in increasingly violent ways, Natalie becomes convinced there is a very real human threat targeting her and wonders if it could be the same person who killed her sister. As all signs point to Andy as the culprit, Sabrina realizes Elijah has been secretly living in the walls of the inn after killing Celia for not allowing Sabrina to see him anymore. Now, Natalie must save herself and Sabrina before they become trapped in Elijah’s twisted plan to keep Sabrina all to himself.