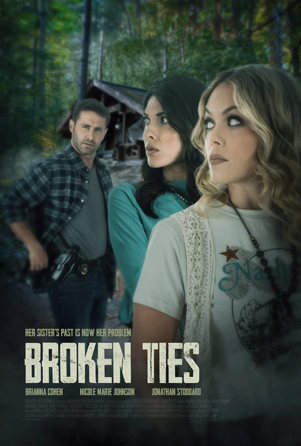 When Selma (Brianna Cohen) pulls the trigger in self-defense to stop her abusive husband, Jason (Zach Meiser), she goes on the run and takes shelter with her estranged sister, Madison (Nicole Marie Johnson), and her perfect family. Upon arrival, Selma lies to Madison saying she wants to reconnect with her. Unsure if she can trust her “free-spirited” sister, Madison reluctantly takes Selma in. Soon after, though, Selma’s actions catch up with her. After Madison’s house is ransacked, Selma is forced to come clean: Not only was Jason abusive toward her but he was also a crooked cop, and Selma shot him in self defense. Fearing Jason's corrupt partners want her dead, Selma flees with Madison to an old family cabin. While hiding out, the sisters struggle to put their differences aside until Madison brings Sheriff's Deputy Rusty (Jonathan Stoddard) into the fold to help them. But when Madison's daughter is kidnapped by the dirty cops as bait to lure Selma out, the estranged sisters must come together to ensure no further harm comes to their family.