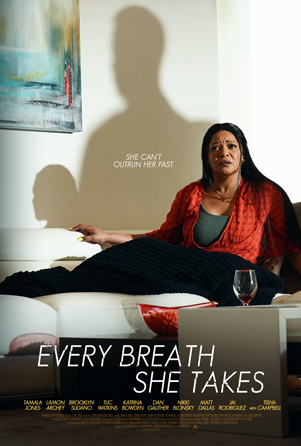 EVERY BREATH SHE TAKES (87 min)

After escaping her abusive husband, Billy (Brian White), in a house fire, Jules (Tamala Jones) is ready to leave her past behind. Although rumors swirl that Jules killed Billy, her best friend, Dana (Brooklyn Sudano), encourages Jules to start dating again, and Jules finds love with Paul (Lamon Archey). Haunted by images of Billy, Jules decides to increase her therapy sessions with Dr. Ron (Tuc Watkins) but is unable to truly move on when new evidence suggests Jules killed Billy. After a series of strange incidents, Jules schedules an appointment with Dr. Ron, but when she arrives for her session, Jules learns Dr. Ron has died in a mysterious hit and run. Convinced Billy is alive, Jules begs Dana to help her prove she’s telling the truth. Concerned, Dana agrees to look into Billy’s background and discovers his plan to frame Jules for fraud. When Billy suddenly appears, Dana manages to warn Jules that Billy is in fact alive before he kills her. Devastated by Dana’s murder, Jules takes matters into her own hands to stop Billy once and for all.