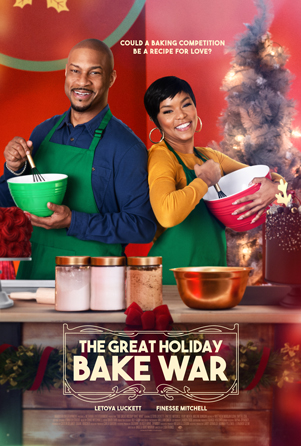 Brianna (LeToya Luckett) and Julian (Finesse Mitchell) are former pastry school rivals who are running their own bakeries when they learn about a holiday TV baking competition. Intrigued by the lucrative prize, Brianna enters the competition and runs into Julian during the preliminary challenge. Noticing how frustrated Brianna is by seeing her biggest rival again after all these years, her friend Layne (Malube Uhindu-Gingala) learns that Brianna and Julian had a disastrous fling in school. Pushing her feelings to the side, Brianna continues with the competition and eventually begins to see eye to eye with Julian, especially as they face stiff competition from popular baker Kandi (Jinesea Lewis). But when Julian thinks he sees Brianna reconnecting with her daughter Willow’s (Naomi Sogbein), dad, Julian resigns himself to never rekindling what could have been with Brianna and throws himself into the competition so he can use the prize money to expand his mother’s bakery. Eventually realizing the true prize of the competition is finding each other again, Brianna and Julian put their differences aside to create a new recipe for success—and love.