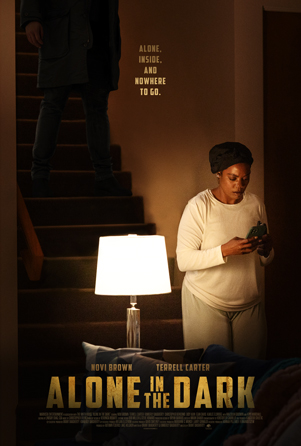 Bri (Novi Brown) is forced to live under house arrest following her ex-husband Michael’s (Christopher Bencomo) crimes. When a stalker begins harassing her, Bri suspects Michael is behind it. Due to the police’s inactivity, her friend and lawyer Sofia (Kimberly Daugherty) suggests that Bri hire a personal security guard named Xavier (Terrell Carter). With Xavier’s help, Bri tries to figure out what’s going on and learns that Xavier’s sister previously went missing near Bri’s house. Bonded by their need to uncover the truth, Bri and Xavier develop feelings for one another. But when Detective Joe Hall (Malcolm Goodwin) tells Bri that evidence suggests Xavier attacked Michael thinking he abducted Xavier’s sister, Bri fires Xavier. Swearing he’s innocent, Xavier reluctantly leaves Bri alone at her request. Shortly thereafter, though, Bri and Xavier are kidnapped by Joe, who reveals himself to be the stalker. A lifelong con artist, Joe killed Xavier’s sister and has been watching him work with Bri to find her. Determined to stop Xavier from uncovering the truth about his sister’s disappearance, Joe attempts to kill him and Bri to avoid leaving behind a witness. After killing Joe in self-defense and saving Xavier, Bri is still unconvinced Joe’s story is the whole truth and uncovers that Sofia hired Joe to kill Bri in hopes of finally getting Michael to herself.