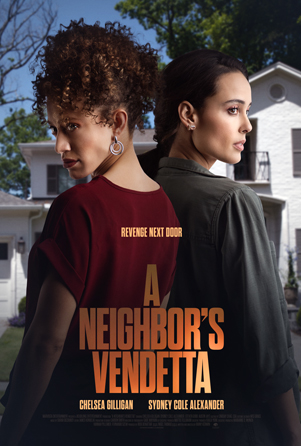 Estranged from her husband Jason (Steven Good), Sonja (Chelsea Gilligan) finds comfort in her boss, Robert (Austen Jaye). When Robert is found dead at a hotel, his wife, Mia, (Sydney Cole Alexander), is devastated, especially when she uncovers that he was having an affair. As Mia leaves Robert’s office following his death, she recognizes Sonja’s perfume when they pass by each other. After learning that Robert has died, Sonja takes it as a sign to give her marriage another chance. Hoping to reconnect, Jason rents a remote cabin where a woman named Clare introduces herself as their neighbor. Slowly reconnecting, Sonja leaves Jason alone in the cabin to head back into the city for a work emergency. While Sonja is away, a thunderstorm hits the cabin, and Clare shows up on Jason’s doorstep claiming her power is out. Jason invites Clare inside for shelter, but when she kisses him, he remains faithful to Sonja. When Sonja returns to the cabin, she is immediately suspicious of Clare. Determined to uncover what Clare is really up to, Sonja sneaks into her home where she is caught by Clare, who reveals her true identity as Mia. Realizing how far Mia is willing to go for revenge, Sonja must stop Mia before she loses everything she cares about.