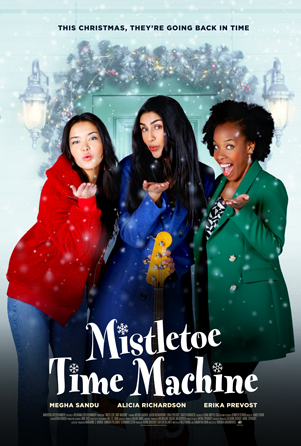 Former best friends Ishani (Megha Sandhu), Taijah (Alicia Richardson), and Mei-Ling (Erika Prevost) haven’t spoken since their disastrous performance at the holiday talent show their senior year of high school. Now in their thirties, the three women are all on very different paths when they’re tricked by Ishani’s father, Peter (Sugith Varughese), into returning to their hometown. When the women get into an argument at a local bar, Taijah’s cousin, Caleb (Gabriel Davenport), steps in to referee, and a bartender who looks strangely like Santa gives the group a round of drinks called “Mistletoe Time Machine.” The next day, the women and Caleb wake up and realize they’ve been sent back in time to relive their senior year of high school! Recognizing this is their chance to fix the things they felt derailed their lives, Ishani votes they should focus on performing better at the holiday talent show. Taijah on the other hand regrets slacking off in school, whereas Mei-Ling seeks validation from the popular kids. It’s not long before the women clash as problems—both old and new—arise. In time, though, the women acknowledge how they each contributed to the downfall of their friendship and realize how different their lives may have turned out if they had stuck together. With a renewed sense of friendship, the women shine during their talent show performance as they’re spirited back to the present where their lives have all improved.