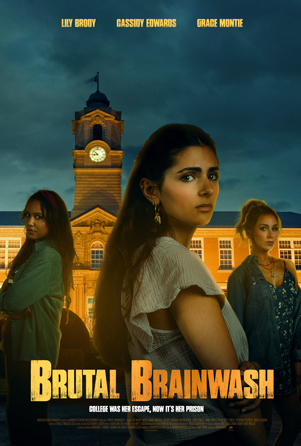 Recently divorced mom Charlotte (Nicole Marie Johnson) promises her daughter, Aubrey (Lily Brody), that she’ll get to go away for college as soon as she can afford out-of-state tuition. In the meantime, Aubrey reluctantly attends a local college and lives at home to save money. As Aubrey starts college, a secret society called “The Kinship” recruits her to join. Desperate to fit in, Aubrey joins, not realizing the society plans to use Aubrey’s deepest secrets as collateral if she ever tries to leave the group. The Kinship emotionally manipulates Aubrey to drive a wedge between her and Charlotte. Fearing how quickly Aubrey has alienated her, Charlotte reaches out to the college’s sociology professor, Dr. Sontag (Carey Wells), for his expertise in cults hoping he can devise a plan for Allison to save Aubrey from The Kinship. As Aubrey is forced to take part in The Kinship’s increasingly sinister activities, she tries to leave the group, but they stop her at every turn. Determined to make contact with her daughter, Charlotte tracks Aubrey down at work, where Aubrey finally reveals that The Kinship has been controlling her. Desperate to get Aubrey out of a bad situation, Charlotte takes her to the club’s house to get her belongings, not realizing they’re walking into a trap. Will Charlotte be able to save Aubrey from this twisted cult?