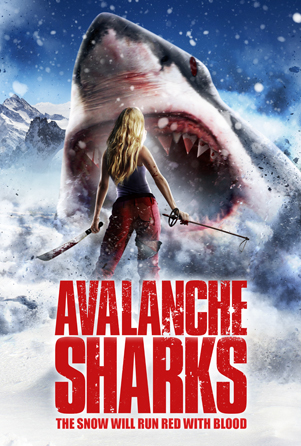 It's spring break and time for Mammoth Mountain's yearly "Bikini Ski Day" party, where skiing, snowboarding, beer and co-eds mix for a wild time. But this year, something's different... something lurks beneath the snow. When an unwitting rider causes an avalanche, it awakens huge, menacing, prehistoric snow shark spirits! These ancient spirits are ready to defend against the intrusive marauders. With a taste for human flesh, the snow sharks pick off the snow bunnies mercilessly. Cut off from help by mountainous terrain and blinding snow, the local sheriff must make an unlikely alliance with a motley crew of snowboarders to take down the snow sharks and stop the white hills from running red with blood!