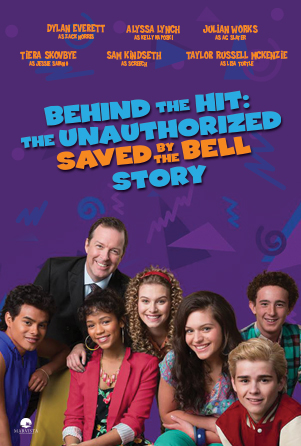 BEHIND THE HIT: THE UNAUTHORIZED SAVED BY THE BELL STORY (90 min)

"Saved by the Bell" almost didn't happen. From major script and cast changes to cancellations, we see the ups and downs of this popular 90's teen comedy through the eyes of Screech, played by Dustin Diamond. Even with their lives in the spotlight, this does not stop the young cast from having the same issues as other teenagers. Dating is difficult, jealousy is apparent amongst Elizabeth Berkley, Tiffani-Amber Thiessen and Mario Lopez. With social issues and pressure from executive producers, the off-camera romance of Mark-Paul Gosselaar and Lark Voorhies never has a chance to grow. When it all becomes too much, Dustin turns to drinking while the rest of the cast ponders leaving the show after an accident with the show's creator leaves its future in dubious hands. Deciding to make the best of their on-camera personas, the group finishes the show in style, a proper send-off in a manner much like their own age, with a graduation. A brief recap of events and positive insight on the successful futures of the cast shows that this experience, while difficult, helped shape who they are.